This is only proposed legislation and is far from becoming law. Although passage is uncertain, this does remove an arbitrary limitation from the current law.

You will recall that the IRS previously created an online Power of Attorney (POA) application for practitioners but closed that system down quite a while back. The IRS is reviving the ability to apply for POAs online. Currently, the IRS has about a four-month backlog of processing POAs.

The Tax Pro Account's functionality will allow tax professionals to initiate what the IRS refers to as a "third-party authorization" online and send it to a client's IRS online account. The taxpayer will then be able to access their online account and digitally approve (or reject) the authorization, sending it to be recorded on the IRS' Centralized Authorization File (CAF). The process is fully electronic and most requests will be posted immediately (within 48 hours) to the CAF database.

At this time, it does not appear that taxpayers will receive notification about pending authorization requests. Tax professionals also cannot view authorization history such as pending requests and statuses.

Some practitioners are skeptical that the new interface will reduce the time it takes to post POAs on the CAF database. Since the client needs to have an online account with the IRS, this may create a bottleneck. Most taxpayers do not generally interact with the IRS electronically and may not be able to successfully navigate through the process, especially the Secure Access registration.

Tax professionals can still use the current established options to make requests such as submit Forms 2848 and 8821 via online tool, fax or mail into the CAF.

Publication 5533 Why You Should Create an IRS Online Account

Publication 5533-B Benefits of Tax Pro Account and Digital Authorizations 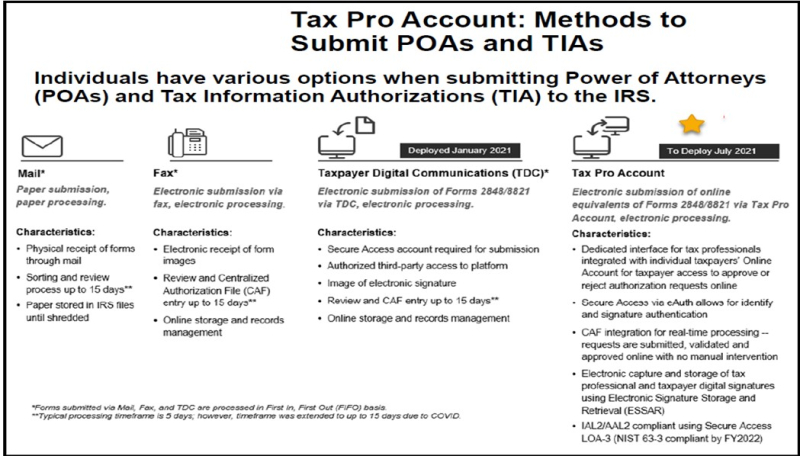 The co-commissioners of the IRS' Small Business/Self-Employed Division (SB/SE) and the commissioner of the Criminal Investigations Division (CI) recently announced that they will be hiring thousands of auditors by the end of September 2021. This is if the IRS receives the anticipated FY 2022 budget increase of $1.7 billion more than it received in FY 2021.

SB/SE will utilize new personnel to increase compliance in the areas of fuel tax, syndicated conservation easements and employment taxes.

The co-commissioners also expect their largest ACS call center to be bilingual in Puerto Rico. The plan is to increase collection personnel in Puerto Rico from 57 to as many as 400 by the end of 2021.

In COVID-19 times, many workers have been free to work from remote locations, and those working from their homes in Texas often believe they do not have to pay income taxes to other states where they would regularly work in an office. Remote workers who perform work most of the time in Texas are generally not required to file taxes in the other state where their office is. However, not all who work from home are considered remote workers by state nexus laws. Generally, if the expectation is that the worker will return to their out-of-state office when the flexible COVID-19 teleworking rules phase out, then the employee may not be a remote worker and may be required to pay taxes in that state.

States that are losing revenue from employees who claim to have worked in a lower-taxing state like Texas may be subject to state audits, with California and New York, for example, carefully reviewing high-income individuals who changed their tax residence.

This area can be complex and to avoid penalties, practitioners with remote workers should advise clients on the nexus rules where the worker’s physical office is located. Employees may wish to ask employers to not withhold taxes in other states where there are offices, and this may or may not be available depending on the employer and the state. However, if there are not any withheld taxes, the taxpayer can avoid having to file a return to claim a refund, a claim that might trigger a careful review of the worker’s situation.

Shortly after this blog was posted, the U.S. Supreme Court ruled that Massachusetts can tax the earnings of a worker who normally worked in that state but who lived and worked in New Hampshire (a state that does not tax income) during the pandemic. This means that the caution in the blog is valid--that if an employee who worked in Texas during the year but is expected to return to work in the other state, then he/she is not a "remote worker" and can be taxed by the other state.

The End of the Preferential Capital Gains Rate?

The Biden Administration has proposed the elimination of the preferential tax rate for long-term capital gains for individuals with adjusted gross incomes in excess of $1 million.

Whether this happens or not depends on whether the Biden Administration has, and wants to use, the political capital to get it through the U.S. Senate. The Senate currently has 48 Democrat senators, plus two Independents who caucus with the Democrats, so passage is by no means assured.

In the last 100 years, there has been much tinkering with the taxation of capital gains: the rate of tax, the holding period, treatment of losses, etc. However, the concept has remained in the law for most of that century.

In 1976, when Jimmy Carter was elected president, his platform included the elimination of the preferential tax rate for long-term capital gains. At this time, the Democrats controlled both the House and the Senate, and there was much anxiety about the demise of long-term capital gains treatment. However, the preferential treatment remained in the law until 1986 under the Reagan Administration, with the enactment of the Tax Reform Act of 1986.

But, within two years of TRA ‘86, the preferential rate for long-term gains was back in the Code and has remained there since.

All this history has little to do with the currently proposed changes, but hopefully, the senators understand the history of capital gains taxation and will consider that history before making a change.

In late May, the Senate Finance Committee passed, with a tie vote 14 to 14, S. 1298, the Clean Energy for America Act. S. 1298 was based on many of the provisions in Treasury’s Green Book that was released earlier that week.

The bill includes many provisions that would provide tax benefits for conserving energy related to atmospheric emissions. But, perhaps most importantly for Texas and other energy producing states, S. 1298 repeals a list of tax incentives for fossil fuel production:

Of less importance to the Texas economy, the bill would also repeal the following:

It seems unlikely that S. 1298 will pass both the House and the Senate.

However, given the concurrent issues of climate control and federal budget excess, we need to be aware that some of these provisions could be included in other legislation that is more likely to become law.

In a recent letter by TXCPA’s Federal Tax Policy Committee, the Senate and House Appropriations Committees were urged to sufficiently fund the IRS to assure the highest level of taxpayer service and compliance with, and enforcement of, the tax laws. TXCPA believes the IRS requires additional resources to accomplish its mission of administering a tax system based on voluntary compliance, which has become even more challenging for the IRS when faced with additional economic responsibilities beyond its core tax administration functions.

AICPA advocated regulation of return preparers in the Tax Reform Act of 1976, which brought us most of today’s tax return preparer penalties. The advocacy was somewhat similar to AICPA’s advocacy today—AICPA sought legislation to regulate unlicensed return preparers to protect the public. Unfortunately, as the 1976 legislation was nearing enactment, the Government Accountability Office (GAO) published a study requested by the Joint Committee on Taxation  concluding that, “commercial preparers are not more likely to make more or larger mistakes on the returns they prepare than are professional preparers.” Congress then made a minor change when it was too late to oppose, and CPAs, attorneys and enrolled agents were swept up in the new regulatory provisions, including the Section 6694(a) penalty for negligent or intentional disregard of IRS rules and regulations.

Today, AICPA is again advocating regulation of unlicensed return preparers as has been widely publicized and provisions are included in the Biden Administration’s proposed American Families Plan. The proposed legislation includes reinstatement of the Registered Tax Return Preparer Program, a limitation on the IRS’ authority to require a PTIN, the authority to revoke PTINs and a GAO study on exchange of information with state taxing authorities.

President Biden has proposed several federal revenue increases as a means to fund the proposed $1.8 trillion American Families Plan. Among these proposals is requiring financial institutions to provide the IRS with taxpayers’ account balances. The argument for this proposal is based on the IRS estimate that as much as 55% of business income is underreported or misreported.

Those supporting the proposal argue that, whereas most taxpayers’ income can be traced to forms such as W-2s and 1099s, underreporting of income for self-employed and small business taxpayers is difficult for the IRS to enforce. The Administration believes requiring financial institutions to report account balances would give the IRS the capability to identify circumstances where deposits or withdrawals do not coincide with amounts reported on a tax return and, accordingly, would significantly reduce the underreporting.

The forms are only required for those filing Forms 1065, 1120-S and 8865 (controlled foreign partnerships) if they have items of international tax relevance—generally foreign activities or foreign owners. If required, the forms must be included with 2021 returns that will be filed next year, although the IRS has already announced that there will be some penalty relief for the first year, with details to follow. The forms “help” pass-through businesses and their owners comply with their U.S. tax requirements, such as claiming credits, deductions and other items related to international taxes. The revised forms are intended to provide information to owners in an organized way and will also provide standardized information in an orderly way for collection and analysis by the IRS.

Firms with clients who are pass-throughs with international owners or activities should watch for and review the forms and instructions that will be released later this summer. You might alert clients to be sure to collect sufficiently detailed information to meet the new form requirements.

(The initial draft of the Form K-3 highlights the significant complexity in complying with this reporting requirement. The draft K-3 is 20 pages long and contains 13 sections, one of which, alone, has 55 lines.)